My adopted city of Alameda is a lovely little island in the bay between Oakland and San Francisco. Until recently doing my shtick as paparazzi to the self driving cars I had to drive down to San Jose/Mountain View/Palo Alto or San Francisco.

But now it looks like there's plenty going on here on my island.

I already knew about Saildrone. They have a nice big sign on their hangar on the old former Naval Air Station. 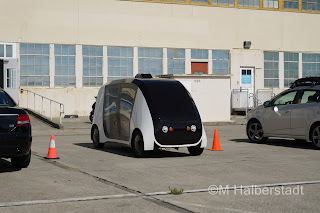 But while drinking a glass of wine at Rockwall the other day, my wife Bridget pointed out a strange vehicle that drove out of another nearby hangar. Turns out it was a project I hadn't heard of called "Robomart." It's some sort of adorable little van that is supposed to be hailed by a consumer, pop open and let them shop for groceries. An interesting idea, but it looks like so many of the Silicon Valley projects throwing stuff at a wall and hoping something will stick. 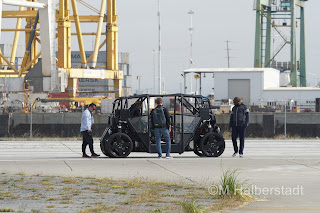 Then, yet another sighting - Zoox. Zoox was in the news recently and I saw their promo video. Zoox bills itself as a "Robo Taxi" seeming to set their target market at teenage boys. Their promo video (ad? advertorial?) was shot on the former runway facing San Francisco. I went over the morning after seeing the video, and as luck would have it, they were testing.

What should I call this- not a "staycation" maybe "workstay"?

All photos are copyright Michael Halberstadt (and the crappy text too ;-) And I have lots more photos - let me know if you are looking for photography to illustrate an article